From Durham with Love event was held tonight at The Rickhouse (pictured right). I attended and had a great time, plus it benefited an amazing cause. The event was for fellow North Carolinians who were hit hard by Hurricane Matthew and included a raffle, silent auction, live music, food trucks and more! The event was spearheaded by my friend, Katie Basden, and I hope it turns out to be a huge success! From what I saw tonight, I think it will be.

In case you missed it, I wrote a post this week that I’m very proud of. A post that is probably one of the most raw and from the heart I’ve written. I encourage you to check it out. I also want to say that it’ll take time for me to come to the realization of a Trump administration. In fact, I’ve decided to not watch the Inauguration or his State of the Union addresses. I know what you’re probably saying: stop being so divisive. You need to accept what happened for the greater good. And, as you know, I’ve always championed respecting the president. This is quite a bit different and you can say what you want about my stance. It will more than likely not change, at least for the foreseeable future. I hope I’m proven wrong.

Speaking of the election, a Facebook post I saw from evangelist, Franklin Graham, has me concerned. In the post, pictured below, Graham recalls and apparent trip he took to an early voting site to cast his vote. Graham went on to say that most Progressives with being Athiest. Really? There are a couple glaring problems with Graham’s assumption: 1) Not all Porgressives are Atheists and 2) Who is he to judge a person and make an assumption about her or his religious beliefs based on their political ideology? I consider myself at least a Progressive in part and I’m a Christian. Graham’s remarks, although I tune out just about everything he says anyway, really bother me. 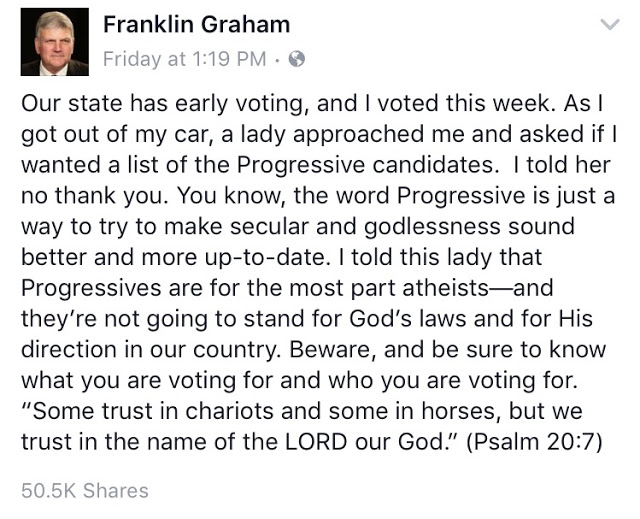 I featured on my “New Music Monday” series and I’ll never forget seeing him audition for The X-Factor in Greensboro. It’s great to see how much he’s developed as an artist since then, releasing several projects, touring with the likes of R5 and Ben Rector as well as doing his own headlining tour and garnering a huge following throughout the world. Happy Birthday man!

P.S. Make sure to check out his music!