After a four-year wait, Apple finally introduced a refresh to its beloved MacBook Pro lineup.

The new machines come in three models: 13″ without the Touch Bar as well as a 13″ and 15″ with the Touch Bar. Before I go any further, you may be wondering what the heck the Touch Bar is. It’s an OLED touchscreen strip that replaces the traditional function row keys. If you’re working in a supported program, the Touch Bar will provide you with controls based on that program.

I’ve been a PC guy ever since I had an interest in computers. I’ve owned my fair share of PCs but the the last one I had ruined PCs for me. Barely two years after buying it, I was in the market for a new computer again. I wanted a fresh start, so I decided to try a MacBook. I made the $2,200 dive in hopes that this machine will last me six years or more, as opposed to dishing out $700 for a machine that’ll last two years. A few weeks in and I have to say I’m impressed. I have an iPhone, so I’m no stranger to the Apple ecosystem. I determined over time that I wanted my files in one place, which can be accomplished by iCloud Drive, as opposed to having them on iCloud as well as Microsoft’s OneDrive. Not to mention, MacOS and iOS are just simpler operating systems. Windows 7 was nice. Windows 8, too. But Windows 10? Not so much. And it’s great to have a computer that doesn’t have annoying, unwanted bloatware installed. Apple installs its highly useful apps that we’ve grown accustom to and that’s it. Below, I detail the good, the not-so good and my bottom line about the new Pros. Take a look. 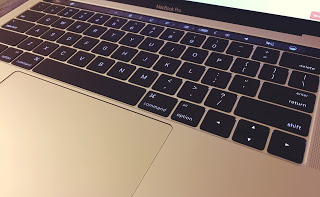